Stimulating the Immune System to Attack and Destroy Cancer Cells

Our Immune Pan-antigen Cytotoxic Therapy (ImPACT) platform is a cell-based, T-cell-stimulating platform that functions as an immune activator to stimulate T-cells.

ImPACT reprograms a live, genetically modified cancer cell line to continually secrete the heat-shock protein, gp96. Once the cell line is injected into the body along with a checkpoint inhibitor, they are bound to the cell’s own mutated antigens bound to gp96. 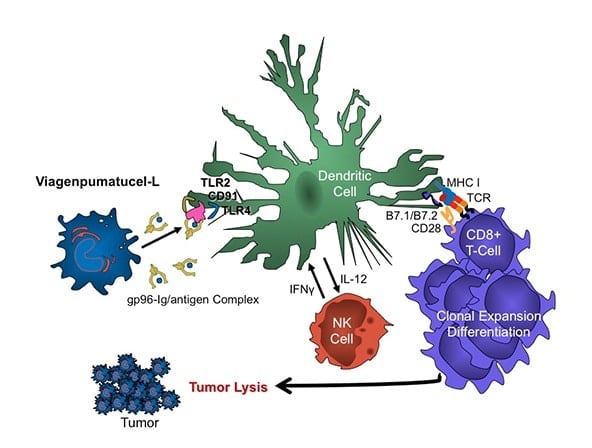 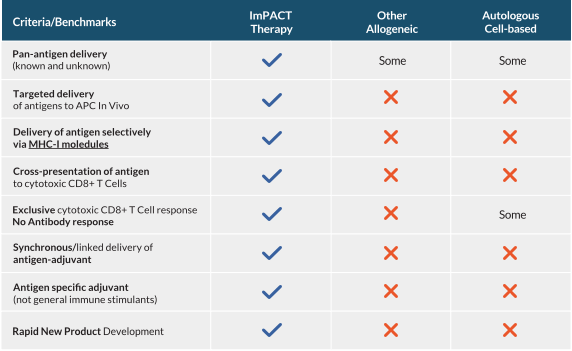 Heat Biologics has harnessed the unique, dual functionality of the heat shock protein, gp96, to develop its innovative immunotherapy platform. gp96, is present in all human cells, and when released, it activates the T-cell arm of the immune system against unrecognized, foreign antigens.

As a molecular chaperone, gp96 is typically found within the cell’s endoplasmic reticulum and facilitates the folding of newly synthesized proteins so they can properly perform their various tasks. But when a cell abnormally dies through necrosis or infection, gp96 is naturally released into the surrounding tissues, causing damage to other cells. At this moment, gp96 then becomes a molecular warning signal to the innate immune system. This part of the immune system is designed to activate exclusively CD8+ T cells.

gp96 serves as a potent adjuvant, or immune stimulator, that simultaneously boosts the immune system, normally alerting it to harmful pathogens. It is among the most powerful adjuvants found in the body and is the only immune stimulator that shows exclusive specificity to CD8+ “killer” T-cells. Thus, gp96 plays a critical role in the mechanism of Heat’s immuno-therapies and T-cell activating platforms.

Through proprietary modifications to gp96, Heat’s ImPACT technology reprograms live cancer cells to continually secrete their own mutated cancer antigens bound to the gp96 chaperone, thus stimulating the immune system, alerting it to the presence of a tumor, and activating a T-cell response against those tumors. In this way, ImPACT therapies mimic necrotic cell death and activate a powerful, very specific T-cell immune response to eliminate the patient’s cancer.

gp96 is typically found within the cell’s endoplasmic reticulum and facilitates the folding of newly synthesized proteins so they can properly perform their various tasks. When a cell abnormally dies through necrosis or disease, gp96 is naturally released into the surrounding tissues, causing damage to other cells.